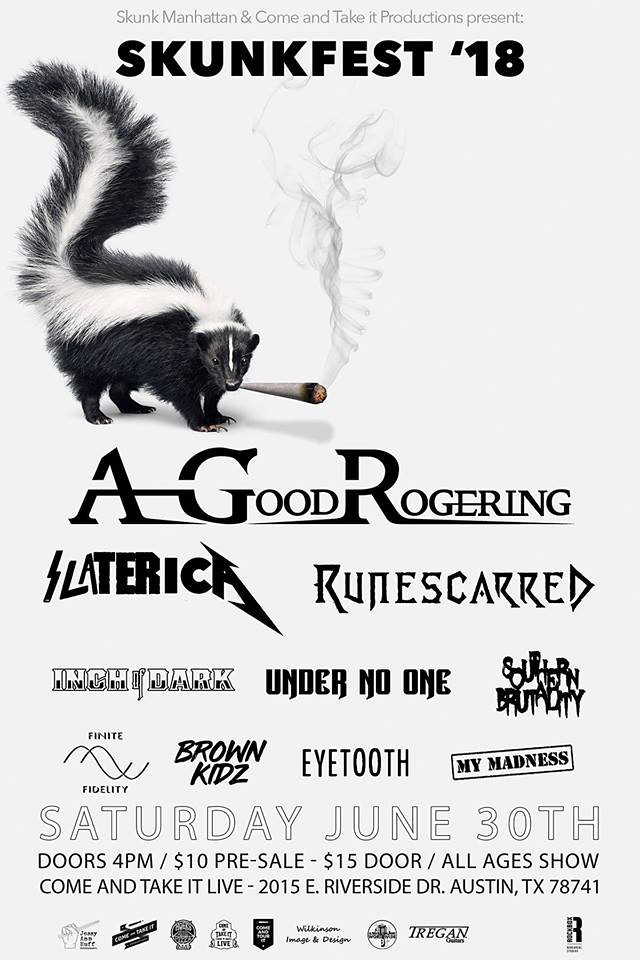 Sean Claes: SKUNKFEST 2018 is June 30 at Come and Take It Live in Austin, Texas. 10 hours of music. First off... what is Skunkfest?
Skunk Manhattan: Skunkfest is an idea I’ve had floating around my head for awhile. I’ve been fortunate to share the stage with a lot of great bands in recent years and I wanted to get a bunch of us on the same bill. Come and Take it Live felt like the perfect venue for a debut so, when I solidified a summer date there, I decided to go for it. Since I first put it on the calendar with just three or four bands the response has been awesome. I’ve had several people reach out asking to be on the bill. For this first go though I thought 10 bands for 10 bucks (pre-sale ticket price) had a good ring to it so we stopped there.

Claes: I’m going to assume it’s titled SKUNKFEST because you’re Skunk Manhattan. Is this the first ever Skunkfest? Birthday celebration?
Manhattan: Not a birthday celebration but yes the first Skunkfest, hopefully of many. And it’s just coincidence that it happens to be on the exact same date as a big show A Good Rogering put on last year at Come and Take it. I dig the fact that it’s on June 30, the exact halfway mark of the year.

As for the actual name, that came about from a conversation a few years back with Yayo Sanchez, of recent “KISS guy” fame. We were talking about lame local festivals that screw bands and I was saying I should start my own festival and here we are… “Skunkfest”.

Claes: The show is running from 4p - 2a and features bands including A Good Rogering, Slaterica, Runescarred, Inch Of Dark, Under No One, Southern Brutality, Finite Fidelity, Brownkidz, Eyetooth and My Madness. Tell me a little bit about each of the bands.
Manhattan: Well, they are all either personal favorites of mine, great friends, or both. And most of them we’ve shared the stage with at one time or another. A lot of these guys have also helped out A Good Rogering (AGR) and are fans of ours as well, so it’s very much like a family event in that sense.

I play in AGR of course and I’ve toured with a prior version of Runescarred (formerly Dead Earth Politics). I’ve known those guys for years! Skunkfest will be their debut show and EP release.

Slaterica, enough said! They’re just pure awesome and fun and a perfect closer that will have us all singing classic metal covers to finish out the show.

Inch of Dark I’ve never played with but have been friends and fans of them for years now. In fact, they were the first band on the bill.

Finite Fidelity is another local favorite of mine. Awesome music and fun guys. We just filmed a Skunkfest promo video actually, and they also played our June show last year.

Under No One is one of my favorite recent San Antonio bands and the first guys AGR played with in 2016 after our hiatus. They have a new album coming out soon.

We played a couple of killer shows with Southern Brutality in Louisiana. They’re crazy good promoters and totally bring it on stage, plus they were super cool to us when we toured, so I wanted to return the favor. This will be their first Texas show and I believe they also have a new album out.

Brownkidz is Yayo’s latest band, a duo with phenomenal vocalist Pearl Turner. I wanted at least one female singer on the bill! And, I mean Yayo was there when the conception of Skunkfest happened so how could KISS guy not be part of the event?

Eyetooth is a new band featuring my buddy Blane Matte, who I played with in Quartershackle and was an original member of AGR. This is also their debut show.

My Madness was generous enough to open the show. They’re just all around great guys from San Antonio, who we’ve played with all over Texas. We’ve never not had a blast sharing the stage with them. I think that’s everyone!

Claes: I hear Willie "Blueballs" Johnson is going to open the show at 4p. Tell me a little bit about him and how you got him to play… why the public should come out at 4p to watch him?
Manhattan: Yep, that’s right. Old Blueballs is coming out of retirement to play this show as well. He’s promoting his new single ‘Mississippi Whiskers’ and I think he was itching to perform at an actual venue for a change. Rumor has it he may even have some sit in musicians…. And his legendary van for photo ops. It’s fun for the kids.

I’ve tried to structure this show in a way that could be appealing to all music fans, so the early bands are more Rock N’ Roll then Heavy Metal. Plus this is an all ages event, and there’s a Hoek’s pizza at the venue, plus a taco truck around the corner, so families or whoever can come enjoy some early music and food before the nighttime metal assault begins.

Claes: With a line-up like this, do you have any surprises up your sleeve? Care to share?
Manhattan: We have a few special guests in store and I’ll be hopping on stage with a few of the other bands. AGR likes to mix things up, as you probably know, so who knows what we’ll do. There will also be a raffle and I’m sure we’ll cook up some other fun stuff. 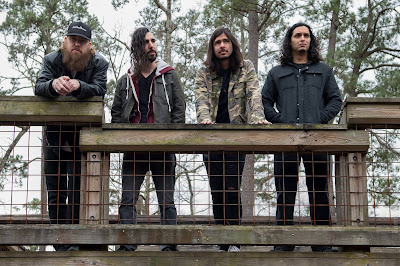 Claes: What’s next for A Good Rogering after Skunkfest?
Manhattan: We don’t have much else on the calendar. We’re playing the following weekend, July 7 on a great bill at BFE in Houston. After that the next show I have is Oct. 27 at Dirty Dog in Austin. And I’ve got some really cool things in the works for that one. We may hit a few local markets, but for the most part AGR  will spend the summer in the studio. Lots of new material is written and we’re ready to follow up our last EP.

Also, Mr. Peanut is coming back with a makeover. I was finally able to give it the proper funk/R&B treatment, and that track has been re-mixed and is ready for iTunes. So you’ll probably be seeing a lot of that cat real soon! Aside from that, keep an eye out for music videos. I’d say A Good Rogering is somewhat known for our live performances, but we don’t have much circulating in the music video department. That is about to change, and I’m really excited about what we’ll soon be releasing.

Claes: Anything else to add?
Manhattan: Yeah, I’d definitely like to say thanks to all the bands who have expressed interest and to all those who have come on board as sponsors. We’ve gotten a variety of donations and I’m really excited to have so many people and companies getting involved. I’ve learned a lot about the process and look forward to building these relationships and adding more in the future. There is a list of them on the Facebook event page and I encourage everyone to support these businesses! I’ll close by giving a shout out to Tregan Guitars for donating a Shaman Skunk graphics guitar, which we will be raffling at the event. Hope to see everyone June 30th!