The World's ONLY Slayer, Pantera and Metallica Cover Band


By Sean Claes
Slayer. Pantera. Metallica. You’d be hard pressed to find three bands as brutal, metal and impactful to the overall music scene as these. If only their sound could be melded into one band. Enter Eric Smith (Powderburn), Derek Halfman (Killa Maul, Black Thorn Halo), Keith Ploeger (Snake Skin Prison) and Marc Coronado (The Crowned). Enter Slaterica - The world’s only Slayer, Pantera, Metallica cover band.
INsite had a chance to talk with some of the members of the band, who are all members of long-standing Austin bands themselves, about how this metal trifecta super-group came together and how they got involved in playing SKUNKFEST on June 30 at Austin’s home for metal - Come and Take It Live.

Sean Claes: You’ve got a pretty extensive group of Austin bands represented in this group - Powderburn, Snake Skin Prison, Black Thorn Halo, & The Crowned. When and how did you guys come together?
Eric Smith: I came up with the idea of “Slaterica” when i was about 19. So I didn’t know any of the guys yet. But I always said when I met them, I would know. I couldn’t ask for a better group of musicians and guys to be in a band with.
Keith Ploeger: I remember him presenting the idea to me years before we even started, but we just hadn’t found the right members.
Marc Coronado: We came together when Eric decided to form the best cover band this world had never had the pleasure of having. He sifted through the best of the best of the best and here we are.

Claes: Slayer, Pantera & Metallica - you’ve got the holy metal trinity there. Was there any other band you considered?
Smith: Fuck no. the name sells it. well, maybe Rammstein

Claes: What was the first song from each band you chose to cover?
Coronado: “Creeping Death,” “Raining Blood,” “I’m Broken”
Ploeger: Picking the songs can be tough. We need an even mix from each band on stage. You have to play some hits, but not too many. We like deeps cuts, but too deep and you lose people. 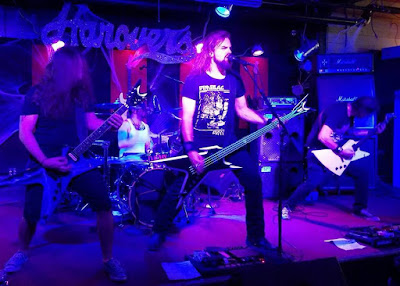 Claes: What is your favorite song you play?
Coronado: I’m a Slayer man. “Disciple” is my jam! Paul Bostaph is one of my favorite drummers ever.
Ploeger: Hands down I think is “Disciple.” There’s nothing quite like screaming “god hates us all!”. Although taking over full vocal duties on that song is really tough. I’ve noticed a lot of smiles though nailing “Blackened” recently.


Claes: Are there any songs that are off limits?
Smith: When I approached the guys with this idea i said we can choose literally

any song from all three bands…..except “Enter Sandman” and “Nothing Else Matters.” Those were
my only two.
Coronado: “Cemetery Gates” for obvious reasons.
Ploeger: I doubt we would ever convince Marc to do anything off of St. Anger although I’d totally be down for it.

Claes: Metallica is still making music. What are your thoughts on “Hardwired To Self Destruct?”
Ploeger: I love it. We actually covered “Moth into Flame” for a short time while the whole Lady Gaga thing was news. Fun tune to play. I like the albums riffs and tone a lot. Very Hetfield driven.
Coronado: They need a new drummer.

Claes: Slayer put out their final studio album in 2015 - Repentless. It was also the only album released after Jeff Hanneman passed away. How do you feel that held up in the discography?
Ploeger: I think it holds up well. About half of the songs stick out really well to me. I loved the music video trilogy they put out. Telling a story, a very violent one at that, was an awesome concept that added depth to the album. I expected a bit more pyrotechnics on drums from Bostaph the way he did on God Hates Us All though.
Claes: Slayer in currently on their farewell tour and making a stop in Austin on June 20. Of course, I’ll be there… will I see any of y’all in the crowd?
Ploeger: Wouldn’t miss it for the world painted blood!
Coronado: I’ll be there early and plan to stay late. Slayer was my first concert ever. I’ll be there for their last!
Smith: FUKN SLAYYYYYYYERRRRRRRRRRR

Claes: Has anyone in the band met any of the other members of Slayer, Pantera or Metallica? Any stories to share that won’t get you arrested or make your next family dinner awkward?
Smith: A guy I randomly worked with when i was 19 was Kerry King’s best friend. He flew me out to LA for the UNholy Alliance tour. All access VIP. I was 19 drinking Jager out of a red bull can standing on the stage while Lamb of God was destroying the place. Then to the front of house booth for the Slayer set. THEN for the backstage party. I sat quietly while my heroes cheers with me while they shared stories of Dimebag. His death was still pretty recent. Then I rode in a limo with my friend, his wife, Mr. King himself and his wife. I passed out from drinking too much. Some time later King shook me awake and said ‘later kid.”
Coronado: The Crowned went on tour with Hellyeah and got to hang out with Vinnie Paul a few shows. He liked our set and watched the whole thing. Also, I got to hang out at Dimebags House. Be in the legendary house and see all the memorabilia. It was truly amazing. The records on the wall, the one and only pedalboard played by the man himself. Truly awesome.
Ploeger: We got to hang out with Vinnie Paul watching Volbeat at the old Emos a few years ago. He was very nice and super friendly. The night got a little hazy for me, but I remember him giving me a hug goodbye outside the Yellow Rose after several lap dances and too much vodka.

Claes: You guys are playing SKUNKFEST on June 30 at Come and Take It Live with 10+ bands. How did you end up on the bill & are you pulling out anything special for the night?
Ploeger: Skunk just loves us that much haha. We’ve got a few new ideas brewing. It is Skunkfest so we’ll likely be heavy.
Smith: I honestly have no Idea. I just hope the skunks are fixed and don’t spray the place up.
Coronado: We have two new songs we are learning but we don’t want to spoil the surprise.

Slaterica can be found online at facebook.com/slaterica and in person on June 30 at Come And Take It Live - as part of the 10 hour music marathon that is SKUNKFEST 18 alongside such acts as A Good Rgering, Runescarred and Inch of Dark.