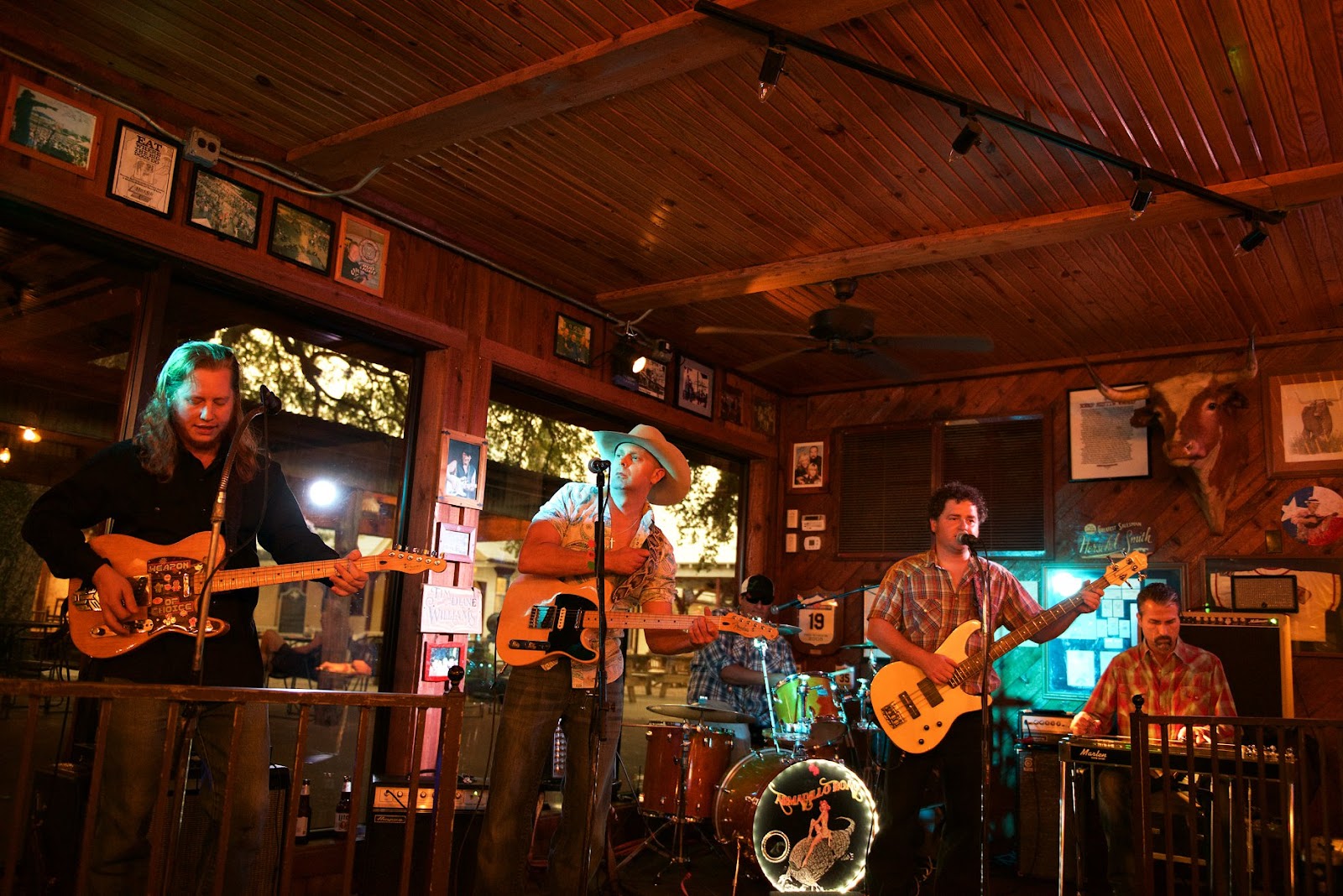 By Sean Claes
Austin’s Armadillo Road formed in 2009 when Tee Jay Hill (vocals/bass) and Josh Jarratt (guitar/vocals) took the jump to Austin from the coast near Houston. They have spent the last decade honing their modern-day bend on classic country. This month, they release their second album, Honky Tonk Way, with two shows - Friday September 7 at the Happy Cow Bar and Grill in Hunter, Texas or Sunday September 9 at The White Horse.


We had a chance to catch up with three of the five members Tee-Jay Hill (vocals/bass), Jeremy Edens - (vocals, guitar), Josh Jarratt (guitar, backing vocals) about how the band formed and where they’re headed.


Sean Claes: Armadillo Road formed in 2009, just when the “bro-country” and “alt-country” sounds were becoming popular. How and why did you decide to make your sound that of the classic Hank Williams/Johnny Bush/Chris Wall - true classic country - variety?
Tee-Jay Hill: I grew up on country music from the 70's and early 80's and really enjoy the classic sounds of the 40's, 50's, and 60's. What's known as "Country" music has slowly evolved into something terrible. We're just picking up where the good stuff left off.
Josh Jarratt: We do indeed enjoy maintaining variety with the subgenres of country music.

Claes: Y’all come from Southeast Texas, West Texas and Louisiana. How did you come together?


Hill: Josh and I grew up playing music together and moved to Austin to seek our fame and fortune. Jeremy (Edens) came from West Texas and moved to Austin around the same time. Jeremy and I worked together at a restaurant waiting tables and became good friends. We both were involved in different rock projects but had country songs written and no outlet for it. We decided to put our songs together and start Armadillo Road. We're all along the outskirts now, but we still claim Austin as home base.

Claes: You’ve opened for folks like John Michael Montgomery, Kevin Fowler and Lorrie Morgan… there’s even a video out there of Fowler singing the Merle Haggard track “Big City Set Me Free” back in 2012 at 290 West. What is your most memorable show?
Jeremy Edens: All of those artists are great and people I have great respect and admiration for. However, my most memorable show is the one we didn't play. We were headed to Ft. Worth to play the White Elephant and a bad storm rolled through. It flooded the highway and blew down trees and ripped faces off billboards!

We decided to go to the hotel first to pick up our keys and the club called us and said that the show had been canceled. They informed us that the parking garage behind the club, where we park to load in, had collapsed. Had we gone to club first, most likely, at least one of us or all of us would have been buried in rubble.

I do believe in divine intervention. And I'm thankful for that show we didn't play.

Hill: We've played a lot of shows. By far our biggest show was opening for John Michael Montgomery and Lorrie Morgan at the Oil Palace. Other memorable shows - We played a rock joint in Midland. We showed up in our pearl snaps and boots and they were requesting Black Sabbath and Van Halen. I thought we were going to need chicken wire to put between us and them. That one was rough.

Claes: Armadillo Road releases Honky Tonk Way, the follow up to your 2010 release Armadillo Road, on September 7. Do you have a release show planned? When and where?
Hill: The album releases September 7th. We will be performing at Happy Cow in downtown Hunter, Texas on the 7th at 9pm. Our "release show" will be at White Horse September 9th. We play the White Horse every Sunday night.

Claes: How did the residency at The White Horse come about?


Hill: Us and Silo Road are great friends and we had been talking about do a show together for a while and calling it the the "Cross Roads" show. The White Horse ended up putting us together not by any request of ours but just divine intervention. It was only supposed to be for 2 months, then they said “let’s finish the year” then they said “we'll just keep it rolling.” When will it stop, who knows but Sunday nights have turned into quite a party!

Claes: Instrumentation-wise the difference between your debut and current album is impressive. How do you feel you’ve progressed as a band since the first album?
Edens: The more you practice the luckier you get
Hill: Michael Small (pedal steel) has been a great addition to the band. He has good licks and a classic country approach that is right up our ally.  We've played a lot of shows since the first album and have really dialed in our brand of honky tonk country music. This album reflects more of our live sound but in a studio setting.

Claes: All 11 tracks on the new release are originals, penned by either Hill or Edens. What inspires you to write and do you have a process or certain place for writing the song?
Hill: Inspiration can come from anywhere and at any time. You better have a pen ready! Usually fueled by emotion from being happy, sad, or mad.


Edens: Personally, I normally don't write until I'm inspired by something profound. However I have enjoyed writing on a set theme, as with Doug Moreland's old songwriter circle.

Claes: The title track sounds like an instant dance hall classic. How did this new take on a classic subject - living the country musician lifestyle - come about?
Edens: The first verse of “Honky Tonk Way” was written many years ago. The hook came to me later and the boys found their own sound from there. Made it a song. The whole is greater than the sum of its parts.

Claes: In tunes like “Baby Wants To Boogie” and “Porch Swing” you bring more of a rock guitar swagger to the forefront while tracks like “Whiskey, You Done Done It Again” and “Do You Wanna Dance” are total two-steppers. When writing, do you have an idea of how the song will sound, or does that come later?


Hill: When you write, your song typically has a vibe or an emotion already. Once you start adding other parts, sometimes the vibe changes. It can intensify or just strongly define the emotion your trying to relay.


Claes: What can folks expect from an Armadillo Road show?
Hill: You're gonna get what we give you and you're gonna like it! Good music by genuine fellas, good dancing, and good times! We always give it our best.

Catch Armadillo Road at one of their CD release parties - Friday September 7 at 9p at the Happy Cow Bar and Grill in Hunter, Texas or Sunday September 9 at The White Horse.