Members Rob Howard, Rick Ciampi, Derek Davis and Victor DeLeon are currently tracking songs for their second release, Danger Noodle which is to see the light of day in October of this year. Apart from recording, Dongle has a big show coming up this Friday at Hanovers in Pflugerville with fellow locals Gun Hill, Chasing After Alice and Dharma Kings. They’re also tapped to be on local legend Dave Prewitt’s DaveTV on August 26.

In the midst of all of this we caught up with drummer Derek Davis and asked him 10 questions. 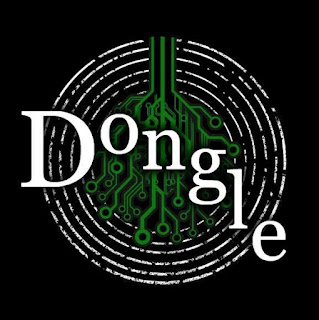 Sean Claes: Dongle has been around since 2011. How has your sound evolved in the last 6 years?
Derek Davis: When we started, we were going for a punk/rockabilly sound. Once we added a lead guitarist, we moved more towards hard rock.

Claes: Being around computers for a second, I always giggled at the word “Dongle” (It’s a small device that acts as an adapter for a computer.)… never thought it could be the name of a band, but it fits. How’d you arrive at the name?
Davis: When we started, we called ourselves Nix Sslips and The Skids to go along with our pink/rockabilly sound. Once the sound changed, we came up with a full list of possible names.  Since most of us were in some sort of tech field, Dongle was the most logical choice.

Claes: The members are an eclectic bunch all with different music style coming into the fold. If I had to but a “they sound like” label on y’all.. I’d say you’ve got an M.O.D. meets Alice In Chains hanging out with early Metallica groove going on. What would you describe as the “Dongle Sound?”
Davis: We were once called porn-punk due to our off color lyrics. I think we have a sound from Offspring to Metallica and AC/DC to Dead Kennedy’s.

Claes: How does the writing process go? How do you birth a new Dongle song?
Davis: Usually one of us comes to the group with a hook, idea or sometimes even full sets of lyrics and then we work on developing a rhythm and go from there.  Most of our lyrics are personal feelings and experiences. 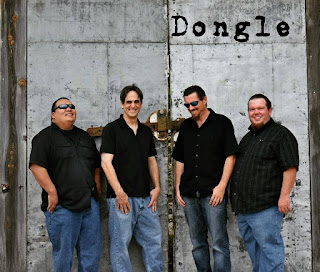 Claes: A couple of your founding members left the band last year. How did y’all handle the change and what have the new members brought to the band?
Davis: We understand why the members left, but it was definitely tough to accept the changes. We had played with Rick, the lead guitarist who replaced Cameron, in another band. Rick brings a classic rock vibe and a HUGE personality to our stage show.  With Blake being a founding member, he was a little tougher to replace.   We met Victor through another musician.  He brings a unique approach to bass lines that throw back to his guitar roots.

Claes: Dongle had been around for a few years before releasing your first EP, In Your Ear Hole in 2015. Why so long before a release?
Davis: When the band started, Rob and our first bassist, Blake, would get together to hang out noodling around and learning a few covers.  It was more of an escape then.  When Derek joined, we finally had a drummer and started working towards playing shows.  We didn’t start actively writing until mid 2013 and it was a slow process then.

Claes: You’ve just been in the studio finalizing your new release. When is it going to see the light of day? Do you have a title?
Davis: The new CD titled Danger Noodle will be released this fall, likely on October.

Claes: The line-up this at your next gig, Hanover’s in Pflugerville this Friday, August 18, includes Gun Hill, Chasing After Alice and Dharma Kings. It’s being dubbed the “Hot For Teacher” show. Tell me a little about the bands who will be joining you.
Davis: Well, Gun Hill is a great hard rock band out of Dallas that definitely bring the party.  Chasing After Alice brings the metal to the stage with driving beats and a female lead vocalist that will leave you wanting more.  Dharma Kings brings rock to the stage with great music and the vocals of David Komie really rounds out the sound.

Claes: What are your thoughts on the current state of the Austin music scene?
Davis: There seems to be plenty of great music in the scene, just not enough interest in supporting and attending the shows.  Some of this has to do with promotion by bands, venues and local media.  For $5 - $10 you can go see bands that have the talent and passion of any “big name” band.  The scene is coming back, and will be huge again if we all work together.  That’s why we are a part of Ear Splitting Media.

As much as we like to perform shows and write music, our favorite things are meeting people, supporting the scene, and hanging out with our fans and fellow musicians.  If you are reading this, go out and support local music, see a show, buy some merch and rock out with some local talent.

Catch Dongle this Friday at Hanover’s in Pflugerville or on DaveTV on August 26. Be sure to find them online at http://www.dongleband.com/, on  Facebook, Twitter, and Instagram. Also, be on the lookout for their next release, Danger Noodle in October. 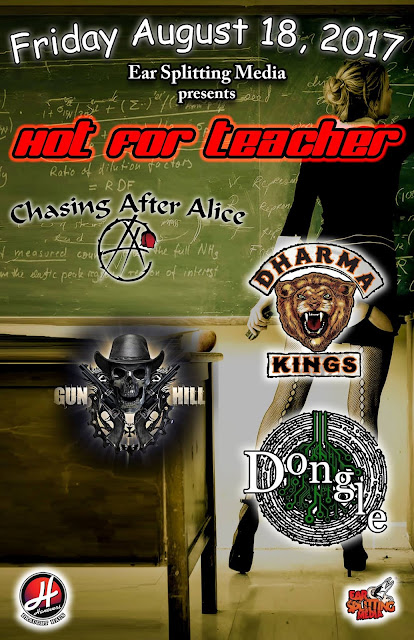 Sean Claes is the owner of Austin's INsite Magazine and has been a freelance entertainment writer since 1996. This is week 32 in his "52 Weeks of Austin Musician Interview" series. See the others here: 52 Week Project