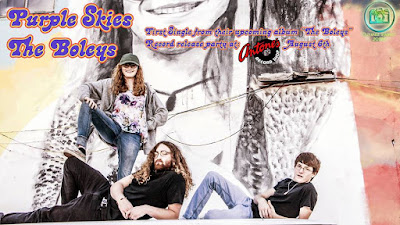 By Sean Claes
Even though only one member of the band is currently old enough buy a beer, the three siblings of The Boleys have been a mainstay on the Austin scene for the past 2 years. Ethan (21, guitar & vocals), Emma (18, drums) and Joe (17, bass) have been able to make a dent in Austin’s rock scene with their genre jumping psychedelic-inspired songs. They’ll play just about anywhere that will let them, and that dedication has garnered them a coveted spot on legendary local gigs like Austin's Bat Fest  and Texas Rockfest.

The band just came off a month-long summer tour with Nathan’s Stupid Drama and are gearing up to release their 4th album, on August 6 at Antone’s Record Shop. Despite this busy schedule, they took a quick breath and answered 10 questions for INsite.

Sean Claes: Three siblings in a rock band. That could go really well or really poorly. How did y’all decide to become a band?
Emma Boley: I think we all decided we wanted to be in a band around the same time. We had all the pieces and we could all jam together so we figured might as well.
Joe Boley: My brother actually taught me the fundamentals on bass, so I just kept going at it from there and around 2014 me and Ethan and Emma started writing songs together and Mike Boudreau booked us our first gig at Red Eyed Fly.


Claes: You’ve been on the scene for a few years and have garnered some pretty high-profile local gigs including Texas Rockfest and Bat Fest. What has been your favorite local gig/Venue?
Ethan Boley: All of the venues we’ve worked with have been awesome, and as far as Texas Rockfest and Bat Fest go, well they always kick ass haha, and we love Adam Brewer, who puts those together. Kick Butt Coffee has been super duper cool to us too.

Claes: How does the familial dynamic work in your songwriting?
Emma: Since we’ve grown up with each other, we all have the same background in musical influences, so it’s very easy to groove on stuff.
Joe: It’s easier to be honest with each other.


You seem to churn out recordings on a pretty regular basis. If my count is correct this self-titled album will be your 4th release in 2 years… and you have a pretty full live show schedule as well. How do you do it?
Ethan: Me and a couple friends of mine went to school for audio engineering and recording, so we’ve been trying to create an effective studio space for cheap for a while, and this new record will be the first we’ve recorded at “Far Out Studios” which we’ll all be working on getting up and running so we can record more peeps for super cheeps.

As far as the live stuff goes, we love to play, and we all actively work on keeping our schedule planned around band stuff. Plus learning the booking and promoting end of things is good practice to get better at it.

Claes: The title track to your August 6 release has has got a 60’s Beatles psychedelic punk rock feel to it, but then listening to a track like “Learning” you’ve got a White Stripes-esque groove and “Surfer Song” kind of has a Nirvana thing going on. Then you have “Birdie” that has awesome three-part harmony that has a stripped down Alice In Chains groove going on. How would you describe your music?
Ethan: Dude, I don’t think we even freaky-deakin know, we just jam it out.
Joe: Psychedelic grunge.


Claes: Tonight you are on Loris Lowe’s show on KLBJ in Austin. Congrats on landing that spot.
Ethan: Thanks brochacho! We’re excited to go on the radio show with Loris Lowe.
Joe: I’m super excited because we grew up listening to her on that radio station.
Emma: Thanks man, I’m super excited, it’s going to be super fun.

Claes: Y’all just got back from your High On The Fly Tour that took you from Texas to Colorado, New Mexico, Oklahoma and back with Nathan’s Stupid Drama in your tour van, “El Toro.”  Was that your first extended tour?
Ethan: Yeah, that was our first extended tour. It went dope as shit. It was a lot of fun. Shout out to Rodrigo Cortes and Jarod Hebert for helping us out along the way, those sexy ladies. LEGALIZE MARIJUANA
Emma: It was an amazing experience. We were very lucky to have Nathan along with us on tour. He gave us lots of advice that came in handy.

Claes: Any road trip stories to tell? Favorite venue along the way?
Ethan: We saw two fights, we visited our friends Dereck, Kayne and Mandy Todd in the mountains, we got to smoke a lot, you can’t buy beer in Kansas in Sunday.


Tune into KLBJ 93.7 in Austin tonight at 11p (or stream it at www.klbjfm.com) to hear The Boleys on Loris Lowe’s show. Then plan to be out at Antone’s Record Shop (2928 Guadalupe St. in Austin) on Sunday August 6 at 2p to meet the band, enjoy some free beer and jam to their new release - event link.

Sean Claes is the owner of Austin's INsite Magazine and has been a freelance entertainment writer since 1996. This is week 30 in his "52 Weeks of Austin Musician Interview" series. See the others here: 52 Week Project