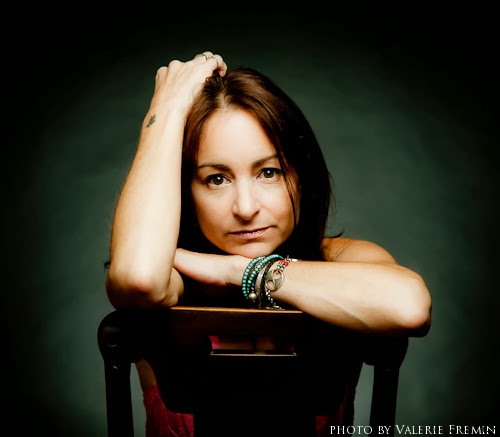 By Gleason Booth
When someone of Alejandro Escovedo’s stature admires a fellow singer/songwriter’s work, it’s a pretty good sign the artist is doing something very right.

But it wasn’t one of Stefanie Fix’s songs that caught the music legend’s attention. It was a necklace from the Stefanie Fix Collection. And the star’s gaze fell on a particularly apt-named piece, The Stargazer’s Necklace.

While not on the lineup of the benefit concert at Strange Brew that evening, Fix had set up shop at the venue and offered to donate proceeds from the sale of her jewelry to the cause of raising funds for Escovedo’s daughter and son-in-law’s flood damaged Austin home. And when Fix noticed Esovedo’s eyes fixed (pun fully intended) on one of her amethyst, brass and pewter creations, she kindly offered it to him gratis, knowing that her necklace around his neck could pay some word-of-mouth dividends.

“So before I handed it to him,” Fix says, “I made him promise that he’d remember who made it and who gave it to him. He was a bit taken aback, I think, but when he finally said, ‘Stefanie Fix,’ we had ourselves a deal.”

It was another in a long line of shrewd business moves Fix has made since marrying her passion for making music with jewelry making and devising a whole new model for DIY that is increasingly being embraced by like-minded musical peers.

Fix is redefining the DIY path that was forged by Ani DiFranco, like Fix, a native New Yorker with a fierce streak of independence and self-reliance. When DiFranco opted to start her own label at the tender age of 18 and use emerging technologies that would democratize the music industry, it was a bold move that presaged the day when the vast majority of working musicians would have no other option but to do it all themselves and independently finance, record, distribute and promote their music.

Fix has added another essential task to the successful DIY artist’s to-do list. Create a unique brand ... a brand that offers the potential to generate revenue streams to support the creation of one’s music.

To Fix, her brand is the key to leading the creative life she wants. A prolific essayist, she explained her Creative Life Manifesto on her popular blog, “Journey to the Sun.”

And that’s where the Stefanie Fix jewelry collection - a style that is equal parts Lower East Side chic and Southwestern cool -- comes in. By augmenting her musical income with the sale of her jewelry, Fix can use her art to make money to make art and keep putting her music into the world.

Jean Synodinos, who is developing a line of notecards, magnets and drink coasters depicting her artwork, says, “Stefanie really inspires me. When I read her blog it truly was an ‘a-ha’ moment for me to finally realize that we singer/songwriters can and must combine our various creative outlets to have more vibrant careers.”

Fix - who has four releases to her credit -- has been stringing together jewelry for as long as she’s been stringing together words and music ... and stringing her trusty Taylor guitar, for that matter. Not one to jump on a bandwagon, Fix is leading the parade with jewelry that has been characterized as “elegant bohemian,” a descriptor that could just as easily be applied to her folk pop musical sensibility.

She started selling her jewelry at gigs at the suggestion of a friend, and it proved instantly popular with her fans, who could go home with both Fix’s music and a bit of that Fix style around their necks, wrists or dangling from their lobes. Before long, Fix was peddling her line at the Kerrville Folk Festival, where she rented a craft booth and was also a Regional Ballad Tree Finalist.

In addition to selling at her own gigs, craft markets and music festivals, Fix has established an Etsy shop that is taking the Stefanie Fix Collection to the worldwide online shopping community. [etsy.com/shop/stefanixcollection] Her online sales have been increasing with each passing month and are enabling Fix to think differently about how she approaches her next music project.

“I’m not really the kind of person to ask for money through things like Kickstarter,” offers Fix. “It’s a great tool for a lot of musicians, but it’s not for everyone. I’m looking to create a sustainable lifestyle rather than just fund a project.”

That mindset is making sense -- and dollars -- for Fix. She’s in the early stages of recording a project that will be funded in part by sales of jewelry designs inspired by the 11 songs she plans for the new album. “I’m excited about this idea,” enthuses Fix, “It’s, quite literally, a brand new way of going about it. My brand new way!”

The Stargazer necklace that appealed to Escovedo is one such design based on a forthcoming Fix track. “I’ve got a new song called ‘Holly Sycamore,’ so I’ve created the ‘Holly Sycamore’ earring,” Fix notes. A different song-inspired piece caught the eye of another shining star in Austin’s musical constellation that evening at Strange Brew. Rosie Flores gravitated to one of Fix’s pendants in her “’Lil Prayer” product line, which sprung from a Fix song called “Where Is My Savior?” While admiring the piece and noticing that it contained the word “Strength” (“Strength - I need that!” said Flores), one of Flores’ longtime fans came up and offered to buy it for her. Little did he know that in doing so, he was both giving his musical idol a lovely gift, but also providing further momentum – and added strength – to Fix’s new DIY model.

Stefanie Fix will be performing on Saturday, March 22 and will have a booth with her jewelry available at The Salado Wildflower Arts Festival March 21-23.

Posted by INsite Austin at Friday, February 21, 2014 No comments: