Fire From The Gods - The INsite Interview

Austin's Fire From The Gods
The INsite Interview

If the status of metal music in today's world was in question, question no more. I was able to attend the All Stars Tour when it made a stop in Austin, Texas on August 15, 2015 at the Empire Control Room & Garage.

Headliners included Upon A Burning Body and Dance Gavin Dance and supporting bands included: A Skylit Drive, Iwrestledabearonce, Within the Ruins, Oceano, Dayshell, Come The Dawn and Conquer Divide. Also on the bill for the Austin show was Zeale (Austin), A Tragedy at Hand (Irving) and Fire From The Gods (Austin).

There was not a dud in the bunch, I was impressed with the quality of metal and hardcore that this group brought to the table. One of the most energetic and crowd pumping (and surfing) bands on the bill was a local sextet by the name of Fire From The Gods.

Although they're been together since 2007, Fire From The Gods, in their current iteration, is relatively new to the forefront of the scene. If the show I witnessed is anything like the show that is currently being performed on their current "2 Legit 2 Pit" tour... fans and newcomers alike are in for a treat. 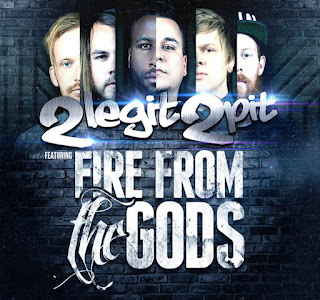 Their tour began with the Hometown performance at the All Stars Tour on August 15 and it'll end at another hometown gig at the Empire Control Room & Garage on September 6 - The Hoodang Music Festival.

BACKGROUND:
FFTG began in 2007 just as the members were graduating high school. The bandmates changed as members moved away for college, took full time jobs and as a natural progression of the band. Founding members Bonner Baker (bass) and Drew Walker are now joined by four amazing individuals who seem to make the puzzle fit perfectly. Vocalist Chris Mardis and drummer Richard Wicander both played in another Austin band, Outlaws to Kings. Jameson Teat played in few local (Austin) hardcore bands, Somewhere in September and Let The Dead before joining FFTG. Vocalist AJ Channer is the new kid on the block in the band. Hailing from New York (by way of England and Jamaica), he's been holding down the lead screamer position for just over a year.

INsite owner Sean Claes had a chance to catch up with founding guitarist Drew Walker after their set at the All Star Festival. We took a walk and decided to do a little video interview... so we found a quiet space.. in an alley between The Red Eyed Fly and Beerland.

First I had to ask about the origin of their name... wondering if there was a mythological meaning. I found out instead, it was based on a 2003 Horse The Band track that sampled a classic video game commercial.


That out of the way, we talked about the current tour.

They were tapped to play the All Stars Tour by Anthony Stevenson of Come And Take It Productions.

Shows like The All Stars Tour tap local bands to open up for the touring bands in order to provide an all-day show. We talked about this idea for tours, which has gained popularity in recent years.

They are currently on a month-long "2 Legit 2 Pit" tour.


Fire From The Gods returns to Ausitn on September 6, 2015 for the Hoodang Music Festival.


Being a band hailing from Austin with 8 years on the scene, I asked Walker his impression on the current Austin metal scene.

Which led to a discussion about the closing of Emo's and Red 7 on the Red River scene.

Turning back to FFTG, we talked about some of their biggest supporters, like Anthony Stevenson of Come and Take It Productions and Dave Dickens of Headbang For The Highway.

Thinking back to the beginning, Walked touched on when the band became more than just a bunch of folks playing music and became something "real."

Walker also touched on the current line-up from Fire From The Gods.


Walker talks about the idea of feeling like the band "Made It."

The next local show for Fire From The Gods will be Day 2 (featuring 18 bands including The Red Cord) of the Hoodang Festival on September 6, 2015 at Empire Control Room & Garage. Make plans to attend and attend early, it's worth your time and energy.

INsite owner Sean Claes had the chance to catch the all-day musical event that was the All Stars Tour on Saturday August 15, 2015 at the Empire Control Room & Garage (606 E. Seventh Street, Austin).

The bands for the day (which began at 2p and lasted until about 10:30p) included:  Upon A Burning Body, Dance Gavin Dance, A Skylit Drive, iwrestledabearonce, Within the Ruins, Oceano, Dayshell, Conquer Divide, Fire From the Gods, Zeale Rapz and A Tragedy At Hand.

Making it just in time to see Zeale perform (with AJ Vallejo on guitar), Claes captured the day on film. The entire album of the day is here. Let's just say the name of the tour did not lie... EVERY band turned  in a fantastic brutal metal or rock set... and for the hundreds of fans who made it out... it was a memorable show.

Below are some choice shots from each set.

The dates of the All Stars Tour are as follows: