This interview is week 2 of Sean Claes' 52 Weeks of Austin Music Interviews.


From Back-up Singer to Seasoned Singer-Songwriter 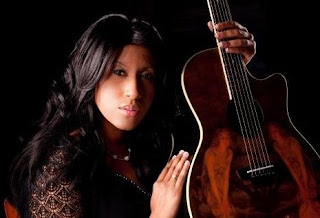 By Sean Claes
I've been playing this generations version of phone tag with Austin's Heather Bishop for about a decade. We knew of each other when we were both involved in an organization called the Austin Indie Alliance, then we kept in contact via MySpace, then Facebook. She's been involved in the Austin music scene since the mid 1990s, and had been either lead vocalist or lent her talents to numerous local albums and bands. She even had a day named for her, when 10 years ago then Austin Mayor Gus Garcia declared February 7, 2002 "Heather Bishop Day." But, we've never met and I've never had the chance to interview her, until now.

Bishop, having grown up and cut her musical teeth in Travis County, has played at pretty much all of Austin's legendary music spots, including past haunts like Liberty Lunch and Room 710, and current landmarks like The Red Eyed Fly, Jovita's, and Opal Devine's. She has two gigs this month (the Whip In (1/17 @ 9:30) and Gypsy Lounge (1/24 @ 6:30).

She currently has 3 releases under her belt, two released in 2011. In addition to her music, she is currently performing one of her short stories at FronteraFest later this month.

Sean Claes: You’ve been playing in Austin for many, many years. What are some of your favorite places to play, both past and present?
Heather Bishop: As a guest artist or with a band, Liberty Lunch, the Black Cat and Steamboat are my favorite long gone places, largely because it was nice to play the same venue as some of my favorite bands. I’ll always love Saxon Pub, though I haven’t played there in years.

Room 710 was a good place for me to cut my solo teeth, because it took a lot for a solo female songwriter to earn respect opening for some of the punk and metal bands back then. The audience would see me walk in dressed like Whitney Houston with a guitar and you could tell they were thinking- why is she HERE? It really pushed my songwriting and delivery and I’ve got a lot of good memories from those days.

Today, places like One2One , Nomad Bar and Lucky Lounge are always fun, and I’m looking forward to collaborating on a show at Antone’s soon.

Claes: What was your first gig, and how did it go?
Bishop: In 1993, someone found me at a college coffee shop in Georgetown, singing acapella, and asked me to do backup vocals for their band at an event on campus at Southwestern University. We covered Aretha Franklin, The Rolling Stones, The Black Crowes and more.

A year or so later, guitarist Lasse Savola and I formed an offshoot project called 2 A.M. Blue. Eventually we got a residency in Austin at the coffee shop that used to be in the foyer of the Paramount and State Theater- Café Solaire. We played Friday nights and Nathan Hamilton’s band The Sharecroppers played Saturday nights. Good times!

Claes: How did you end up getting into the music business?
Bishop: I just fell in. I grew up singing, playing instruments and writing music and over time people asked and encouraged me to do it professionally. In the beginning it wasn’t so much a conscious choice, just a natural progression.

Claes: You’ve got a unique sound to you, kind of a folk/singer-songwriter with a blues influence, kind of like a velvet-voiced Shelley King. How did you arrive at your sound?
Bishop: When I was a kid I would sing along to records and mimic the artists as closely as possible- everyone from Aretha Franklin and Tina Turner, Billie Holiday and Lena Horne, Dolly Parton and Tanya Tucker…too many to list.

I wanted to learn more than the lyrics, though. I wanted to learn how the songs felt- the inflections and emotions attached to the songs. Obviously I never sounded exactly like these artists, but I think the practice went a long way towards helping me find my strengths and limitations so that I could find my own vocal space.

Claes: Tell me a little bit about that beautiful guitar in your press photos. Very ornate.
Bishop: The guitar is called Midsummer Night’s Eve and is part of Luna Guitar’s Fantasie Series. It’s spruce and mahogany with mother of pearl inlay, and features a painting by Edward Robert Hughes (1849-1914) that looks like a scene from Shakespeare’s Midsummer Night’s Dream, which was my favorite of the Shakespeare plays that my mother read to me when I was a kid.

Claes: In 2011 you released 2 albums, a full length, Trains and Revolutions and The Story Sessions. This was your first solo release since 2001’s Graceful Riot At the 710. Why so long between recordings?
Bishop: In 2011, Trains and Revolutions was unplanned and deeply personal- recorded with Cris Burns at Summit Studio in response to several sudden deaths among friends and family, and The Story Sessions was recorded specifically for the NPR program, because I had nothing else ready for them.

For at least part of the time after Graceful Riot at The 710, I was dealing with medical issues that required time and effort to address. It pushed plans out a few years, but it felt really great to eventually get back on track.

For the rest of the time I did session work for other artists and completed most of another album that was my most challenging to date. I worked with producer Yoggie Musgrove on a record called Equilibrium, and asked him to push me beyond my normal comfort zone, which he did. I couldn’t be more pleased with the result and look forward to the final touches and eventual release- I think it will surprise some folks.

Claes: What is your favorite track on Trains and Revolutions?
Bishop: Wow, that’s a hard one. I really do love this collection. If I had to pick just one I guess I’d say “Cool As You.” The title is a subtle nod to Lucinda’s song “2 Kool 2 B 4-Gotten”, and although it could be a sad song, it doesn’t feel that way to me. It was written as the story of a couple parting, but was part of me processing the death of a family member. For me it has a hopeful “Hey – this is sad but I’ll see you around” vibe.

Claes: You’re one of the “Spirit Singers” for the Contemporary Christian FM radio station Spirit 105.9. How did that come about?
Bishop: I was familiar with the agency that put out the open call for auditions and thought, “Why not?” I auditioned and lo and behold…a few weeks later I’m dancing on a rooftop in downtown Austin with a camera crew.


Claes: Did you have a spiritual upbringing? Does your faith play into your musical career?
Bishop: Spirituality was always present growing up, but in a quiet, subtle way. My family is made of up different faiths, so the greatest thing I learned was respect for others and that it’s perfectly possible to love each other and get along despite differences.

Since those ideas shaped who I am I suppose they are present in my writing, but not usually in a conscious, overt way.

Claes: Who are you playing with these days?
Bishop: These days I sit in with the bluesy duo Old Gray Mule and the mash-up cover band More Cowbell on occasion, and I’m looking into a few other projects right now. No new names quite yet…

Claes: Besides performing your music around town, you’re also performing your short play about online dating, titled “Miss Match” at Hyde Park Theatre’s Frontera Fest on 1/27. What can you tell me about the play?
Bishop: Oh my…well it’s definitely a short, light-hearted comedy. After a divorce years ago, I tried online dating at the recommendation of some friends. It was hilarious!

To be fair, I made some truly great friends and I’m thankful for that. There were moments, however, when I realized I was no longer on a date, I was on an adventure. I had the option to stay and see how it ended, or leave and miss a good story. The funniest moments came from the worst dates, of course, and as I talked to people I realized that I wasn’t the only one who experienced this. The play is a highlight reel of sorts, of the best (worst) moments.

Claes: Who are some of your favorite local bands?
Bishop: Oh wow..too many! That said, I tend to focus more on individual players than bands. For example, Ephraim Owens, Brannen Temple, Malford Milligan, Jeff Plankenhorn and those cats- I’ll always check out whatever projects they’ve got going on. No matter the style, I know it’ll be good. Two of my favorite vocalists are LZ Love and Lisa Tingle and I love a little Dale Watson for my country swing.

Claes: If you could plan your dream concert, who would be on the bill?
Bishop: That always changes, but at the moment Over The Rhine, Lucinda Williams and The Rolling Stones. Yeah- I know. But hey- this is MY dream concert, right? Right.

Claes: Do you have any advice to up-and-coming Austin musicians?
Bishop: Rehearse. Be respectful of your time and others. Enjoy, but treat it like a job- it is work. Challenge yourself- don’t be complacent in your skills. Do your homework. Don’t be offended if someone doesn’t know who you are or what you do- let your work and product speak for itself.

Austin is a big small town- how you treat people resonates in the community. Take advantage of the resources available- there are a lot of people with experience here who are willing to share what they know. Oh- and for session folks just starting out- make sure you get credited on the final product- it’s good to build your portfolio.

Claes: Anything you’d like to add?
Bishop: Well…. I’m always working on multiple projects, and there are two I can mention at the moment. I’ve partnered with Chef Beau Been from Traveling Bistro Catering and we’ll have a new cookbook out later this year. Chef Been is a joy to work with and I’m very excited about the project! And lastly, I have a short story collection that will be out later this year. Very thankful, no complaints!

Here's her appearance as part of the Spirit 105.9 "Spirit Singers"